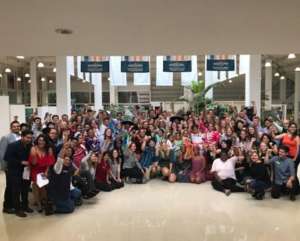 The goal of Up with People’s world tour has always been to share different cultures with people around the globe and give back to the communities we visit. That impact gained a whole new meaning when, just two weeks before Cast B 2017 was scheduled to arrive in Mexico, a devastating 7.1 magnitude earthquake struck Mexico City and the surrounding area.

Originally, the cast was going to stay with host families in Cholula, a community in Puebla, Mexico, for one week, but the epicenter of the earthquake badly damaged many of the homes in that area.

Up with People decided to spend two weeks in Mexico City instead of the one week that was planned. But homes there were also very damaged, so the cast housed in nearby Naucalpan.

After their two-week stay, Cast B 2017 will visit both Querétaro and Monterrey, Mexico, for one week each.

IT’S WHY WE EXIST

“It’s why we exist,” says CEO Dale Penny when discussing the importance of helping communities that truly need support. “The mission of Up with People is to promote not only goodwill and understanding between people, but to be a part of giving back to each community. So, what we hope is that when we leave each community, regardless of if they’ve had any natural disasters or not, that we’ve left the community in better shape physically and also that we have helped promote understanding and connection and bridging across cultural boundaries wherever we go. It’s a very much part of what Up with People is. It’s not every day that our tour coincides with some sort of a natural disaster. When it does it’s important that we adapt and adjust what we do so that we’re contributing to what their needs are at the time.”

Buildings and homes were destroyed, people were trapped, and Mexico was once again faced with rebuilding its community.

“Our choice was either to cancel or to try to be a part of the solution,” Dale says. “What we did not want to do is go there and not be a part of helping the Mexican people in their time of need.”

FROM PERFORMANCES TO BENEFIT CONCERTS

The cast’s performances typically raise money to be distributed to various causes within the community, but this time, things are different. Money raised at the performances in Mexico City will be donated to United Way of Mexico City and performances in the other two cities will help those directly affected by the earthquake.

“They suffered from hundreds of people being killed and thousands being displaced,” Dale says. “We’ve seen a great spirit of the Mexican people through their volunteerism in the recovery when they were fighting for the lives of people buried, and in the recovery and restoration of their city. We didn’t feel we could be there without giving back.”

All of the cast’s previously scheduled visits at the three Mexico stops will remain, but the focus of their service projects has changed to include any hands-on cleanup and rebuilding of damaged properties.

Up with People is grateful to have the opportunity to help the Mexican people and give back after this tragic disaster especially because several other visiting organizations canceled trips to the area due to the earthquake.