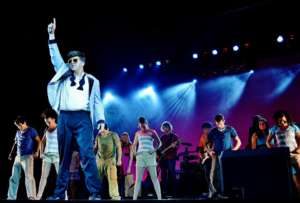 Music has the power to evoke emotion, bring us together and inspire action. That’s why, for the past 50 years, Up with People has used music as a universal language to lead people toward positive change. To do so, our shows need to express a powerful message, but many people don’t know what goes into creating that message.

“The magic isn’t the person holding the microphone, it’s the tangible power of people from 20 different countries standing behind them singing the same message,” says Eric Lentz, Senior Vice President of Up with People. The message we convey in our show needs to cross geographical, cultural, and religious boundaries.

At Up with People, we understand our world is ever-changing and that our production needs to change with it. That’s why having knowledge of current events, societal concerns, and understanding what is and isn’t resonating with people is vitally important to what we do. In order to create the best show possible, we need the help of others, which is why we look to three resources.

It is important that we stay up-to-date with world conditions and events because our mission at each city we visit is to cater not only to the physical but the emotional needs of the people there. For example,in Mexico, we decided to sing “Cielito Lindo,” translated to mean “Sing and Don’t Cry,” a song sung when first responders found someone after the earthquake. It was our way of speaking to the hearts of the Mexican people after a tragedy.

We also change the language of each performance depending on the country we are in. That’s not to say that every song is sung in the native language, but the introduction and messaging between songs is presented by a native cast member. We want to make sure that our audience easily understands our message.

Our cast members play a big part in the creation of our shows. Not all of the individuals who tour with Up with People come from a performing arts background, but they all want to make a difference in the world. That’s why their help in crafting the message behind our shows is so important. Their feedback is valuable and unlike any other, because they spend the entire tour fully immersed in the culture of the country they are in through their time spent with a host family. They can see and feel when a certain message resonates with a particular audience. Perhaps, while volunteering with locals, they learn about new issues facing this population.

So, we ask our cast to gather objective feedback from others and tell us what they think about the shows as well. We want to know which songs they connect with, and which they didn’t.

Well-known singers and songwriters can use their fame to reach an audience of millions. That’s why we listen to prominent names all over the world who are addressing significant issues in their lyrics and topping the charts. For example, in 2011, Lady Gaga’s song “Born this way,” a pro-LGBTQ anthem that addresses self acceptance, reached no. 9 on The Billboard Hot 100 chart.

We listen to the style of the song. Is it rock or pop? Is it upbeat or more like a ballad? Then, we take our observations and create a song list that caters to what youth are listening and reacting to. We believe it is the best way to ensure our message is resonating with our audience.

We understand that the world is ever-evolving, but we also know that the need for positive change is persistent. Together, we will continue spreading hope to the world.