My name is Mariquit Tantuico Palabyab—and most Uppies know me as Kit. I hail from both the USA and the Philippines and I traveled with Cast A in 2011 representing the Philippines. After my student semester, I was hired on as a PR for two more casts B11 and A12 and did set ups in Minnesota and New Mexico (USA), The Philippines, Denmark and Finland. 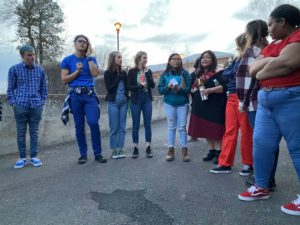 I had the true honor to bring 40 of my students and their families to (what no one knew would be) one of the final shows for Cast A 2020 in Flagstaff, Arizona. We facilitated an entire day of intercultural exchange and activities between the cast and Hopi students, culminating in a pre-show traditional Hopi meal and a bond that even continues to this day, after A20’s tour cancellation. None of this would have been possible without the support of my fellow alumni, but to tell this story, I have to start from the beginning …

I was introduced to UWP when I hosted three members of Cast A 2010 for five weeks in Manila, Philippines. Five weeks! Naturally, I built connections I still cherish to this day from that time. Cast A10 had two Hopi members: Tiffany Bahnimptewa and Lance Sekakuku. Fast forward eight years, and I was living in Prescott Valley, Ariz., teaching at a middle school. Learning that the Hopi Nation was not that far away, I contacted Tiffany from A10 and was invited to a basket dance ceremony in November 2018.

That very evening, Tiffany’s sister connected me with the Hopi High principal, and I learned about the level of need. By the end of that year, I had applied, interviewed and accepted a position with Hopi High—and relocated to the reservation. Now, in my second year with the school, I teach Native American history and civics. I also run the student council and coach cheerleading.

Earlier this year, I was hoping to organize a trip to California for my students to tour colleges and universities. I first posted on the IAA group to see if I could connect with alumni in the area, but the trip ended up not moving forward due to scheduling conflicts and the prohibitive cost. I was disheartened…but not for long.

Soon after, I saw that Cast A 2020 was making a stop in Flagstaff, located near (enough!) to the Hopi reservation. Thinking back to my time as a PR in New Mexico, we worked with an Apache tribal high school to arrange a cast meal and cultural presentation. I hatched an idea: What if I pivoted my field trip plans a bit closer to home?

Being the crazy dreamer I am, I didn’t want to limit the trip to one of my classes. I knew Up with People’s core values and messaging would resonate with not only many students at my school, but with their families as well. The suicide rate for youth in this community is the worst I’ve ever experienced in my whole teaching career and these kids still come to school and find reasons to smile and enrich their lives. I knew attending an UWP show would be rewarding. However, to make this trip a reality, I knew I’d need extra support.

I turned to where so many of us have when we need help: Our alumni family. From my first post about this project on the IAA group, I had overwhelming support. Lee Ann Markle Hamilton (‘77D) was one of the first alumna to react—followed by several more who pledged their support. I’d love to list every single alumnus/alumna who supported, but I encourage you to check out my posts on the group page to see everyone!

Before I knew it, I had enough money for tickets to the show for my students, their parents and guardians, and money to fund a cast meal that could feed my students, our chaperones and any alumni who would like to join in.

Finally, the day of the show arrived (March 7). We arranged for a few different community performances for our music students, where we interacted with local UWP alumni and some of A20 held admissions booths and got to meet the Hopi High kids. Then, the music students traveled to the show venue to watch rehearsal while the other students assisted our Hopi caterer prepare the traditional meal.

The main dish of the meal was Noqkwivi: mutton and white corn stew (with pinto bean soup as the vegetarian option). The soup was accompanied by piki: Hopi blue corn bread that is finely ground and cooked paper thin on a hot oiled stone. We also had yeast bread in various options for those who preferred or needed gluten free or other preferences. After being a PR, making sure everyone’s dietary needs were met was paramount! It’s never fun to have a cultural experience that you find yourself excluded from. For dessert we had Somiviki: a sweet blue corn pudding that is steamed in a corn husk.

The Hopi food was very special because the meat and corn used in each dish was lovingly grown, harvested, stewed and ground in Hopi. The Hopi are dry farmers. They use no technology in their farming process and do not irrigate their soil. Instead, they dance and sing in prayer for rain on their Mesa tops. Nothing in the food was processed or had additives for color or taste. It was traditional: medicine for the body, nutrients and nourishment. Nothing more.

During the meal, the Hopi kids interacted with A20 and shared Native art and facts about different Native cultures in the region and the United States. They were also able to deliver letters many of them wrote to the cast to share about their hopes and dreams — if you’d like to see some of these letters, you can read one each from Christopher, Kaitlyn, Clarissa and Jessica at the links.

And finally, of course, the students got to see Up with People: LIVE! On Tour! My students were awe-struck (even those who were a bit reluctant to attend the field trip). Some danced, laughed and cheered in their seats with the rest of the audience. In others, just the light in their eyes and softest of smiles told me they got something good from all of it.

I think my own eyes were swollen from happy tears just from observing them and the positive ripple the day made in their lives. Some of them even applied to UWP. I truly believe the messages highlighted in the show saves lives, even those of my students. For weeks after (before in-person classes were cancelled), they’d even ask me to play their favorite songs in class.

However, neither I nor my students saw ourselves represented in the American medley. I’m Asian-American and I did not see myself represented. I did not see my students represented and that was one of many issues their letters to the cast addressed. My Philippine narrative, much like my students’, is one that includes colonization. The Spanish, Dutch, Japanese and United States all had a hand in diminishing our original identity. I struggled with this identity crisis in college the most but found a way to rediscover myself when I traveled with UWP.

The story could have ended there, but it doesn’t.

As Cast A 20’s tour was suspended, and everyone flew home, our lives on the reservation also were impacted. To “Keep Hope Alive,” together, I hatched an idea to continue the intercultural exchange that began in person through video chats between my students and A20 participants. You can read more about this on Up with People’s blog here.

There is a beautiful Hopi proverb I use in class often to remind the kids why history, cultural exchange and pride in your identity has importance:

History serves as a reminder of where we’ve been but is not a sure answer to where we are headed. We learn from past mistakes and successes to ensure we understand who, what and where we are now in order to make the best decisions for the future.

As alumni we have a unique superpower. Once we take that leap off the bus, comes the question of how we use it. I challenge you alumni to blaze more trails of hope wherever you are, in any way you can. I’m a teacher, so the trail I blaze is in the classroom. The lessons and values you’ve learned on the road and from the people you met, don’t let them fade to memory. Keep them alive in your words and actions because they have more weight than you will ever know. Especially in the turmoil that our planet is experiencing at present.

We are “stronger together”.