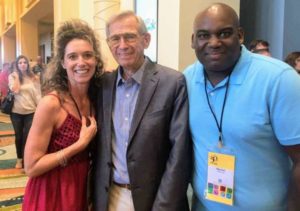 Hi, this is Sabine from Germany. I traveled in Cast D90 and did PR in 1991-92. I would like to share with you how Up with People has had a major influence on me — even 22 years later — and how it changed my life forever.

During the second half of our year, we visited the South of the US: North Carolina, South Carolina, Alabama and Georgia. After having had a memorable stay in Selma, AL with an incredible welcome by local youths singing gospel songs (which I still have on my tapes), and our keyboard player Jill Holland accompanying them ad hoc on a piano, we made our way to the next little town – Scottsboro, AL (Scottsboro had been the site of the infamous “Scottsboro Boys” case). This was one of our longer stays (5 days), and we were all looking forward to one of our rare free days. I remember finally going to the hairdressers and catching a film at the local movie theater. Come Sunday (show day), I asked my host family if they could take us (my roommates and I) to a church service “with nice music”. So, my host mom’s boss took us to the Greater St. Paul AME church. I was greeted and welcomed (very friendly) by some church elders and a nice young man right at the front door. We engaged in some small talk about Europe, as he had recently been to England, France, Germany and Switzerland with his band, so we had a nice topic to talk about. After church we continued our conversation, and he ended up inviting me to his home for lunch.

Having been open-minded, curious and fully emerged in the UWP spirit — take advantage of every opportunity that presents itself — I gladly accepted and off we went in his red car. Was not thinking that I would probably be late for rehearsal.

A little later, I found myself surrounded by his family, enjoying a nice home-cooked meal (mashed potatoes, green beans & chicken – according to my diary). We chatted about this and that, and I told them about Up with People and what it was all about. Of course I ended up inviting him to that night’s show at the town’s high school. He called his boss at the local radio station where he was on duty that night asking him for the night off. By the time he took me back to the high school for rehearsal, I had missed half of it. Wasn’t that why we joined UWP? To have cultural experiences and interact with people wherever we go?

I remember wanting to do “something special” for him during the show, but do not remember what that was. I was constantly looking for and at him. I convinced him to do the interview after the show because I thought he would be perfect for the program. Everyone was immediately smitten by him. My friends said that he was such a great guy and absolutely needed to travel! Especially since he fulfilled the sought-after “3 Ms”: male, musician, minority. Of course he was accepted, but unfortunately already had another commitment that eventually prevented him from traveling, which him and I regret to this day.

Nonetheless, he came to see me off the following day. Still on the bus, I wrote my first letter to him. Many more from all around the world were to follow in the years to come. He surely had left a strong impression on me with his open-mindedness, his interest in and curiosity about the world, along with his warm and welcoming charm. We established a nice penpalship over the next few years.

We met one more time in 1994, while I was visiting my host family in Fayetteville, NC during my year at The American University in Washington, DC. But then we somehow lost contact as life continued for both of us on different continents.

Flash forward to 2013. I am recovering from a slipped disk, being tied to my bed for days if not weeks. In my pain and misery, I was longing to reach out to “somebody special” more so, since I was still mourning my mother’s and grandmother’s passing away — within 18 days from each other. Who came to my mind? For some reason, it was this wonderful guy whom I had met at church some 22 years before: Maurice (Moe) McDonald. So, I, finally, did what I had never done before, and I reached out to him on Facebook. I thought “Hm – maybe I’ll hear back from him in a week, a month, a year – or never.”

30 seconds later my phone beeped: “Is this you, Sabine ? The girl from Trier, Germany? The girl who traveled with Up with People ?”

WHAT ???? How in the world did he not only respond so fast, but also remember me AND the name of my hometown? I was in shock!

A few moments later we found out that my hometown and the city close to where he lived (Ft. Worth, TX) were sister cities. That couldn’t be a coincidence! It was just another sign that things were meant to be. And – as they say – the rest is history.

We got engaged on Christmas Eve 2015, and tied the knot on January 4, 2017. After more than 3 years of long-distance relationship , as everyone who has experienced it — will agree — can be tough and lonely at times, but – the wait was well worth it !

We have attended reunions together since 2015 (the wonderful 50th Anniversary Reunion in Orlando) and we are looking forward to being in Tucson again this summer.

I will always be grateful to Up with People for allowing me to travel the world and meet such wonderful people, such as my husband. I owe the love of my life to this amazing organization. My husband told me he always knew in his heart that there was a world that existed that was ready for change and ready to accept him even though he came from a place of division. Up with People represented that change and acceptance for him, and he’s always credited UWP for affirming that inner truth.

Thank you, Up with People, and thank you, Mr. Belk, for bringing people TOGETHER !!!

P.S.: The “something” he wanted to show me in his room back in 1991 turned out to be his collection of medals and awards from school.
Sabine Haeberlein
(Trier, Germany – Cast D90)