Herb Allen, 88, composer, arranger, xylophone virtuoso died peacefully March 3rd, 2018 in Tucson, Arizona surrounded by family and friends. He was born in Seattle in 1929 to Herbert and Lillian (Dot) Allen. In 1965 he was a founder of Up With People, and its music director until his retirement in 1994. Recognized as a musical prodigy at an early age, Allen conducted the Seattle Baby Orchestra when he was six, and played his xylophone weekly for eleven years on a popular radio show. In his high school years he led a dance band while studying classical piano. 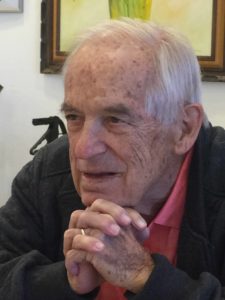 After graduation in 1947 Allen became assistant music director of the musical revue, “The Good Road,” that toured the U.S., Canada, and the war ravaged cities of western Germany and Italy. For years Allen studied under legendary composers George Fraser and Dr. Will Reed. Fluent in Italian, at 22 in Assisi, Italy he composed a musical setting for the immortal Prayer of St. Francis. In 1953 he met the Colwell Brothers, Columbia recording artists, at the Moral Re-Armament conference center in Caux, Switzerland. That was the beginning of a collaboration that would last a lifetime.

In 1958 Allen wrote the music for the signature song of the landmark musical, “The Crowning Experience,” based on the life of African-American educator, Mary McLeod Bethune. It opened in Atlanta, Georgia to a black and white audience which, for the first time in the theater’s history, was allowed equal seating.

In 1965 following a decade of work in Europe and the developing world, at a summer student conference on Mackinac Island, Michigan, Allen and the Colwells co-wrote and produced the youth musical, “Sing Out ’65.” This was the precursor of Up with People, which was incorporated in 1968 as an independent educational and cultural organization.

At a life-time achievement ceremony in 2004, Allen received special tributes from David Grossman, then V.P. of Paramount Pictures for television music, and Marilyn Bergman, president of ASCAP (American Society of Composers, Authors, and Publishers). Award-winning record producer David Mackay called Allen “the greatest musician I know.” In the course of his life Allen wrote thousands of songs and musical scores. He often joked about his short stature, but he was a giant man, with a heart that embraced everyone. He said, “I teach life as much as I teach music.” Herb always welcomed the chance to greet anyone at any time, anywhere, to get to know them. His legacy lives on, not only in the brilliance of his music, but also in his irrepressible spirit, his humor, his compassion, and a profound humanity that touched the lives of thousands around the world.

The family has asked that donations in memory of Herb be directed to The Colwell/Allen Scholarship Fund at upwithpeople.org/give

For individuals who would like to contribute to Jane’s ongoing care, there is an established campaign at Fundly.com/Herb-Jane-Support-Campaign. Please note funds going to Fundly are not tax deductible.

A celebration of Herb’s life will be held on Friday, April 20, at 12 noon at the Victory Worship Center, 2561 Ruthrauff Rd., Tucson, AZ.

In the news: Iconic ‘Up with People’ group founder passes away at 88 by KOLD14 Tucson.